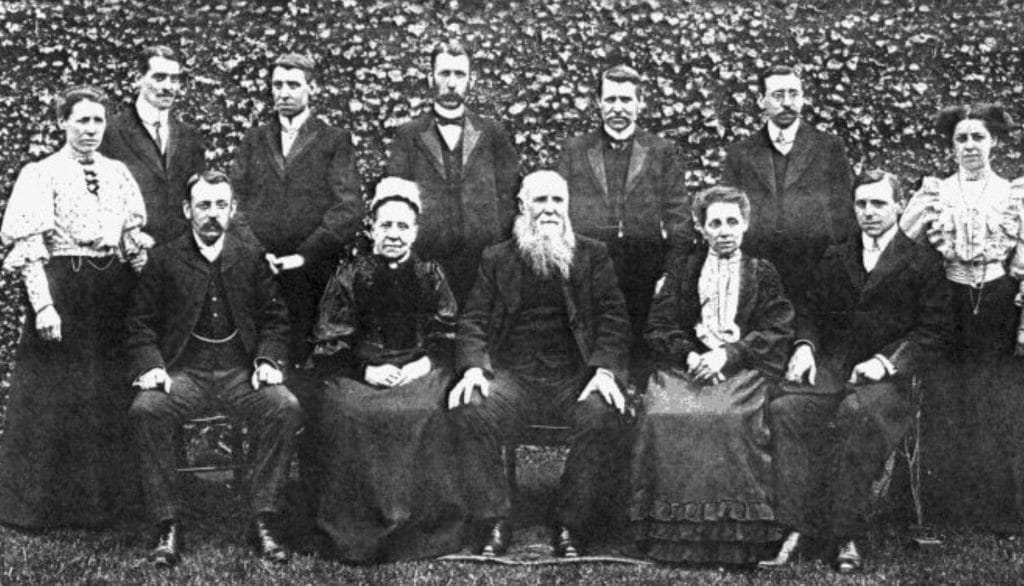 Sidney is the gentleman in the centre of the picture with the rather grand white beard.

I believe the original photograph from which this picture was taken is located with Tim Rowell.

I also discovered another picture which I believe is Sidney Rowell.

This photograph is in the Ancestry website associated with the user sellerh85 and in their Seller/Mingard family tree. This tree seems to have been constructed by a descendent of Mary E Rowell who married   a painter and decorator called Walter Goodchild.

This picture is mounted on a card mount with the name of the photographer ? Vales 150 Kirkstall Road Leeds. 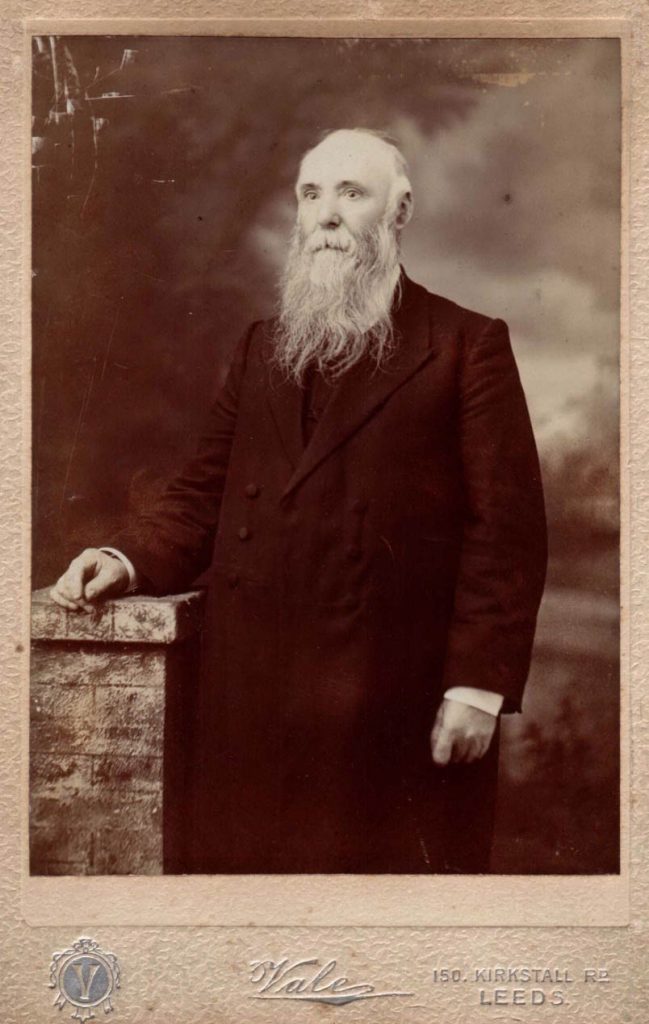 This old picture of Salem Chapel may also have Sidney as the elderly gentleman in front of the chapel:

Sidney lived at a number of different locations. The Huntingdonshire locations are shown below:

A diagram of Sidney’s family is shown here.

The information at the front of the schedule is shown below:

The relevant information is shown on page 6:

It seems likely that the widow Elizabeth recorded here is Sidney’s grandmother (Benjamin Frederick’s mother)
This is probably the house in which Sydney grew up: 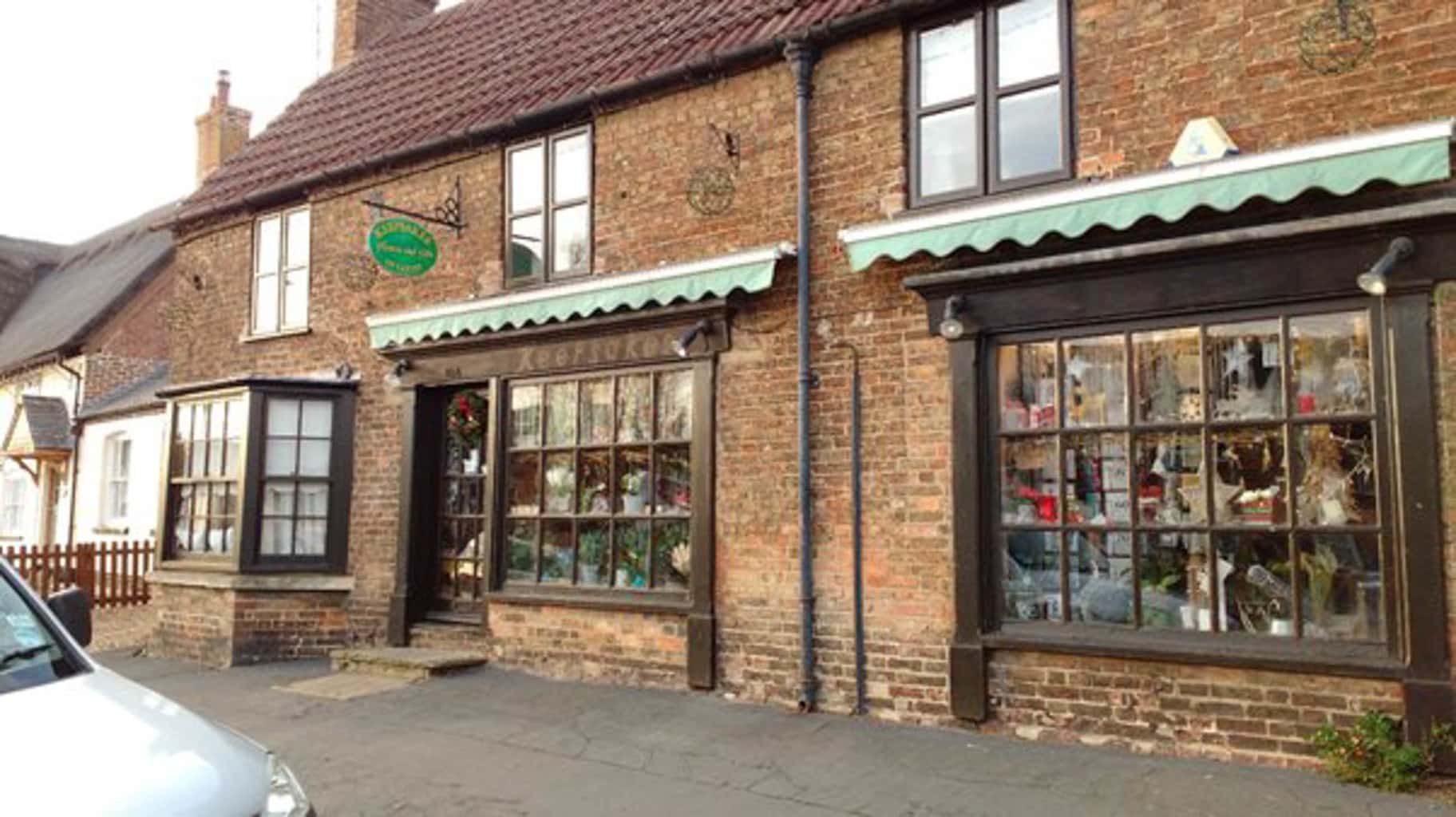 This shows the front of the Census schedule:

The description of the area covered is:

All that part of the town of Yaxley which lies to the North of the Town Street.

This census gives a snapshot of the escapade that Sidney was involved with alongside his older brother Walter.

This is how the escapade is recorded by Ebenezer George, Sidney’s son:

My father was one of many, and was led away by Satan and ran the downward road for some years and no doubt gave his father and mother much trouble. He and his brother Walter learned the tailoring, and when grown up went to London and I believe lived a wild life. He got amongst a lot of hawkers and took up selling cheese and silver plated goods. He told me how they deceived the people. They bought a cheap common cheese and then made a hole in the middle and filled it with good cheese, then got the customers to taste it.

Walter and Sidney are living in a house with 22 people in it: 2 Norfolk Street. Next door in 2A Norfolk Street there lives a Tailoress 44 year old Caroline Depere. On the other side in number 3 is William Patterson the Piano tuner. Ambrose Thomas and his wife Martha are the largest family in the house. They have 4 sons and a daughter. Emily the oldest child is 8 and she and her younger brother Robert go to school. Ambrose is a “Bookbinder and Forwarder” (Forwarding is part of the process of bookbinding). They have a single servant, Mary A Coalson who is 20 years old.  Mary Bowcan lives in the same house and her son, Benjamin, aged 11 is an assistant to Ambrose Thomas with the bookbinding. In one of the flats that make up the house lives another family, the Kells. George Kell is an Optician and he lives with his wife Rachel and their 3 young children. In a third flat live the mysterious Mr and Mrs Dunn and their lodger Francis Venning. Richard Dunn and Francis Venning are both listed as ‘Gilders’. Their work is putting a thin layer of gold over other metals. It is fascinating to compare this with the description given about Sydney by his son Ebenezer above how that used to deceive people with silver plated goods. Did Richard Dunn and Francis Venning do the silver plating for them?

Fascinatingly a little further down the road is the house which 30 years earlier was occupied by Charles Dickens: 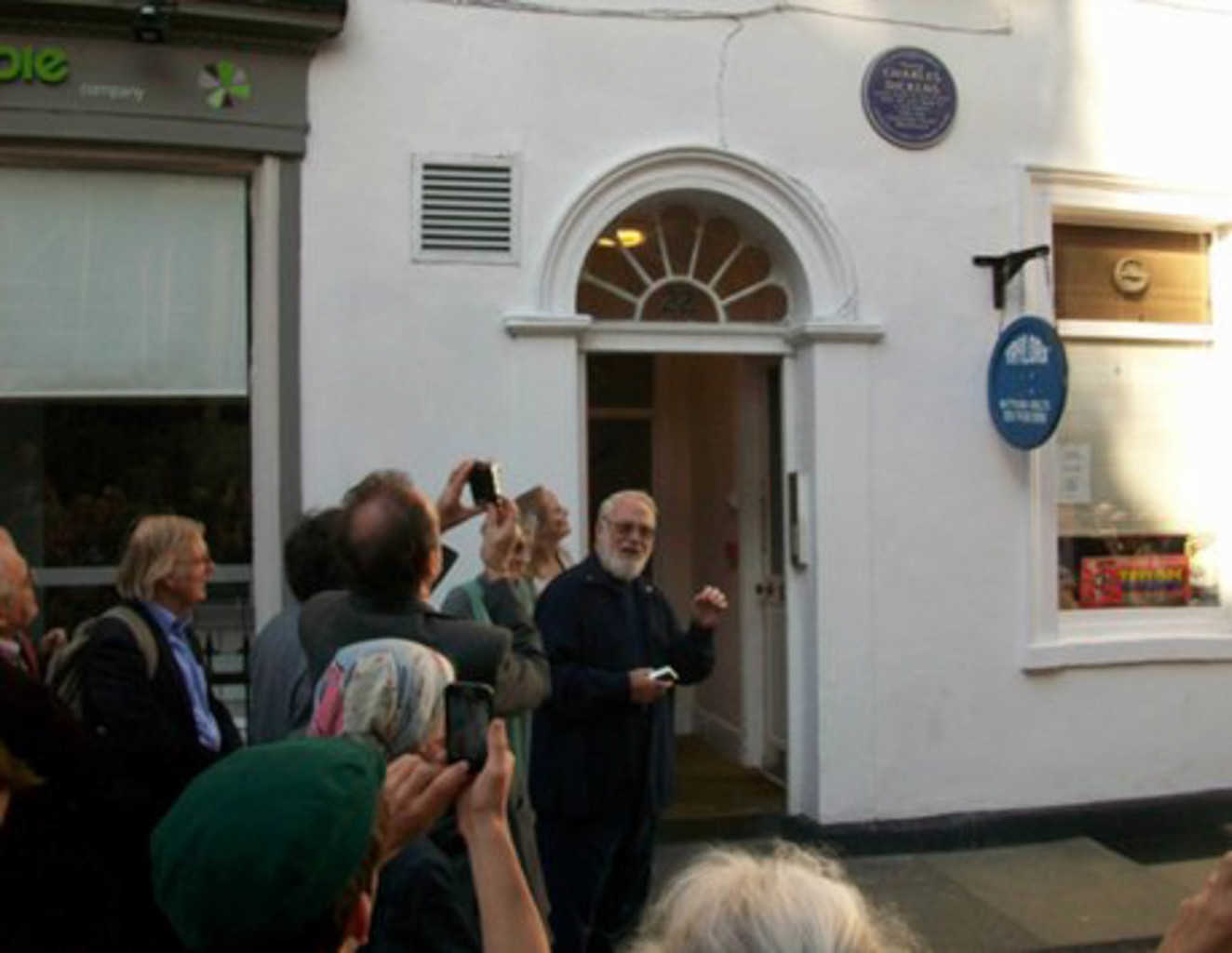 This was the house he occupied as a young man rather like the lodgings that Dickens has young David Copperfield living in as he begins to make his way as a journalist. 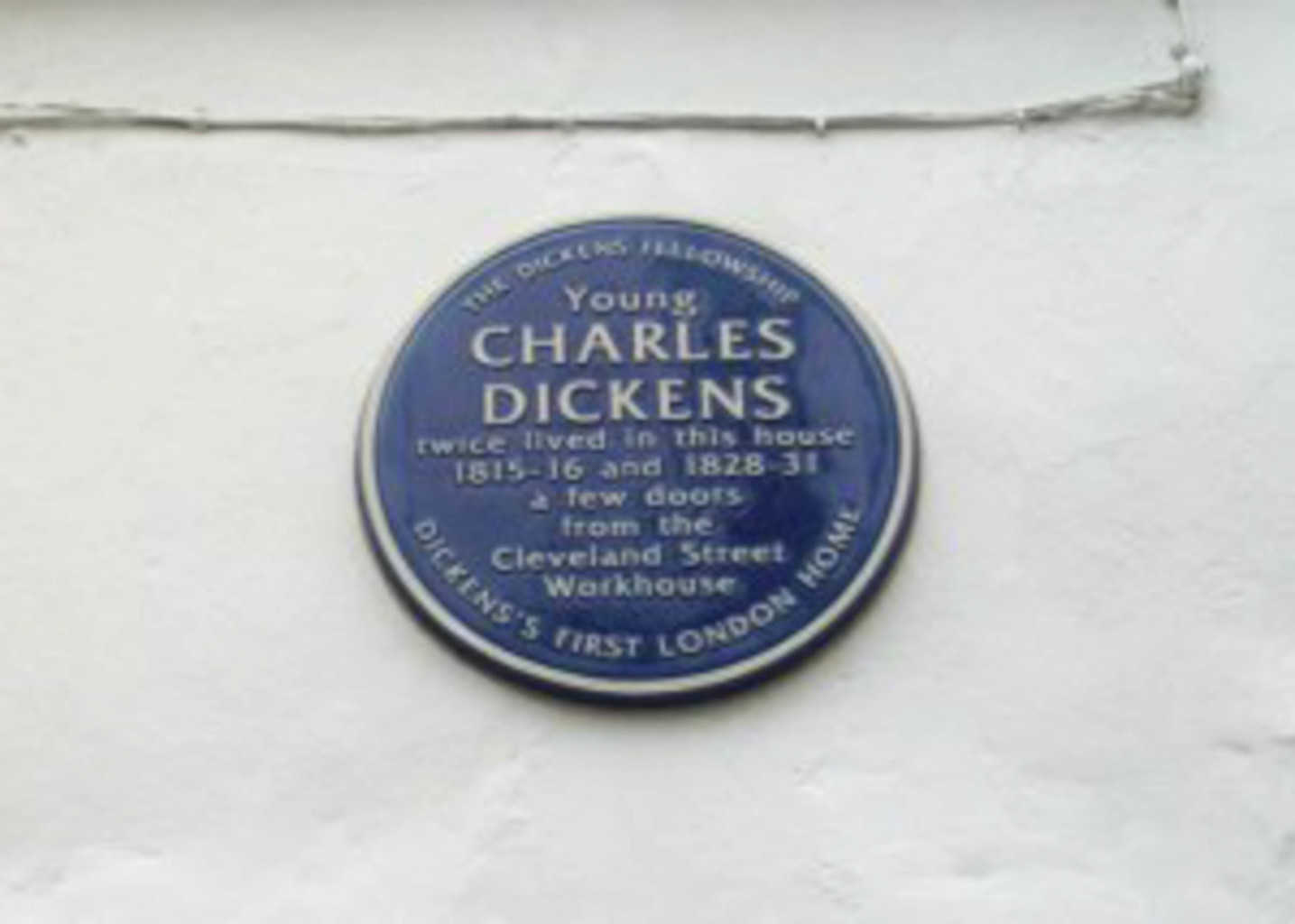 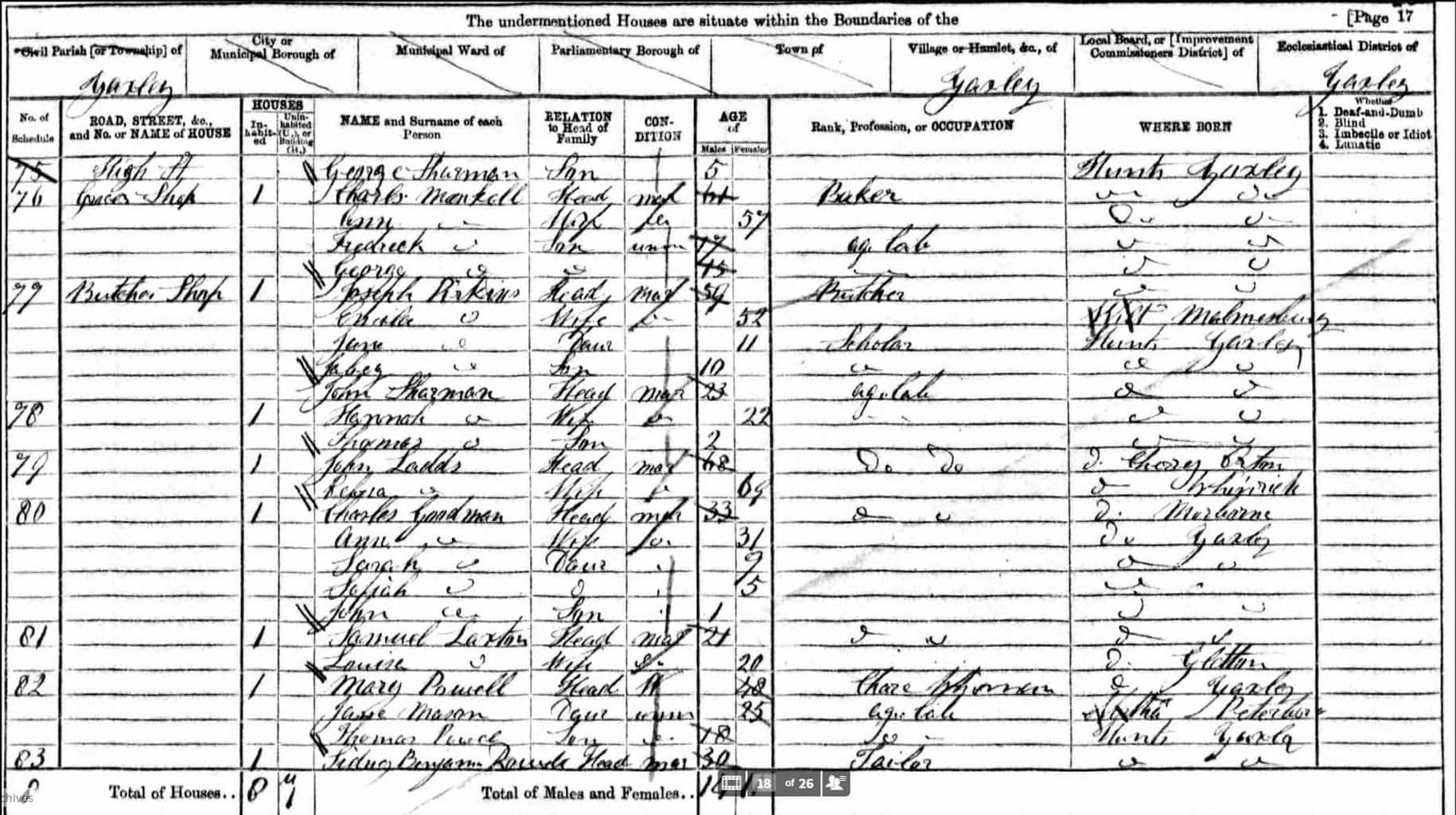 It is this period which is described by his son Ebenezer George like this:

He now fell in love with the one who was my mother and came home and settled down a bit, and after some time was married to my mother. 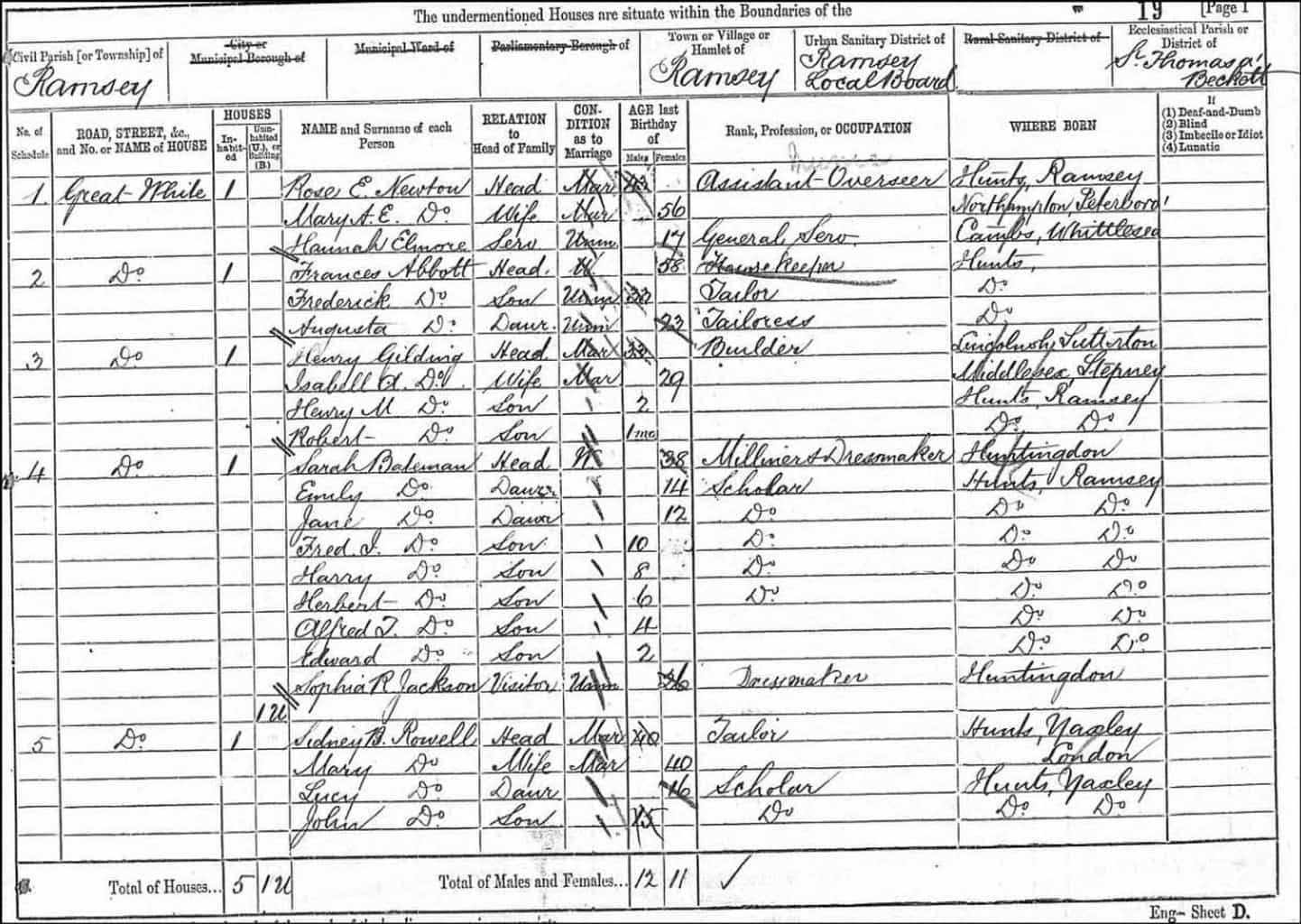 Here Sidney is living in Ramsey and is married and the children have begun to arrive.

Before moving to Wistow and then Ramsey Sidney had a life changing experience.

In the words of his son Ebenezer George:

He and my uncle were very fond of coursing as they lived in the fens, and they both kept very fine greyhounds. My uncle was in a very good position and could stand it but my father was not, and as there was a young family come along he got behind (i.e. in debt. Ed.) and great trouble came into their lives.

Then the Lord began to work and He brought down his heart with labour. His business went wrong and was sold up, and at that time they were able to take even the beds as well. My mother at this time was expecting a little one again, and father had to make up a bed and beg some straw to fill it and mother had to lie on the floor. My mother was an only child and had been brought up well and cared for.

What with this and soul trouble, my father felt he could not carry on, and went to Peterborough bridge to throw himself over. But the Lord spoke to him and stopped him. How Satan loves to lead men on until he carries them to destruction. The way of transgressors is hard. 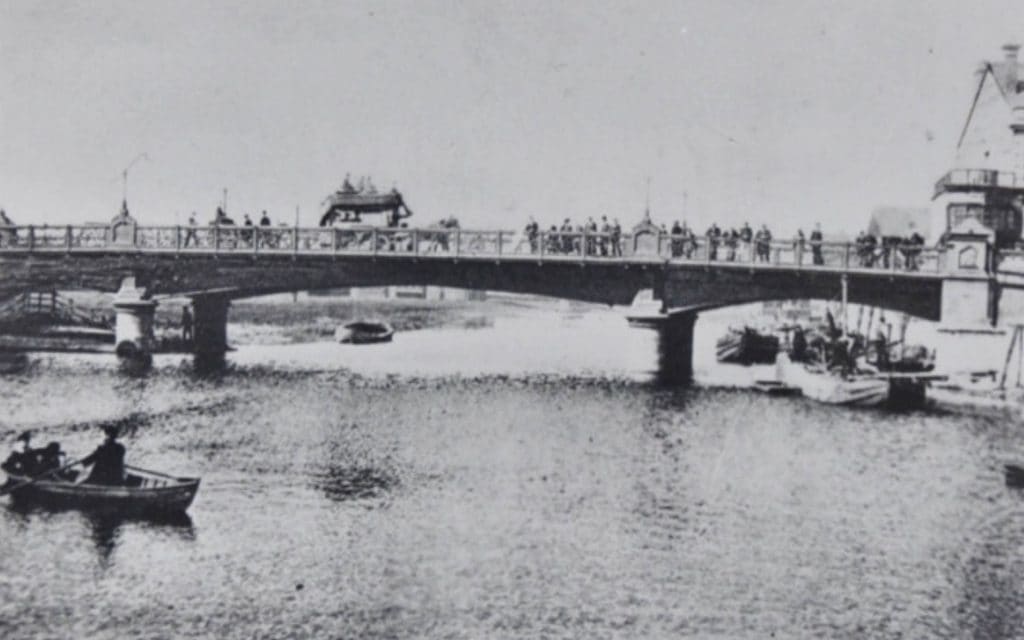 About this time he moved to a village called Wistow, near Ramsey, and started in business there, but things did not go very grand and at last he moved to Ramsey, Hunts.

Next door is Sarah Baleman who has 7 children and no husband. She is a Milliner and dressmaker. 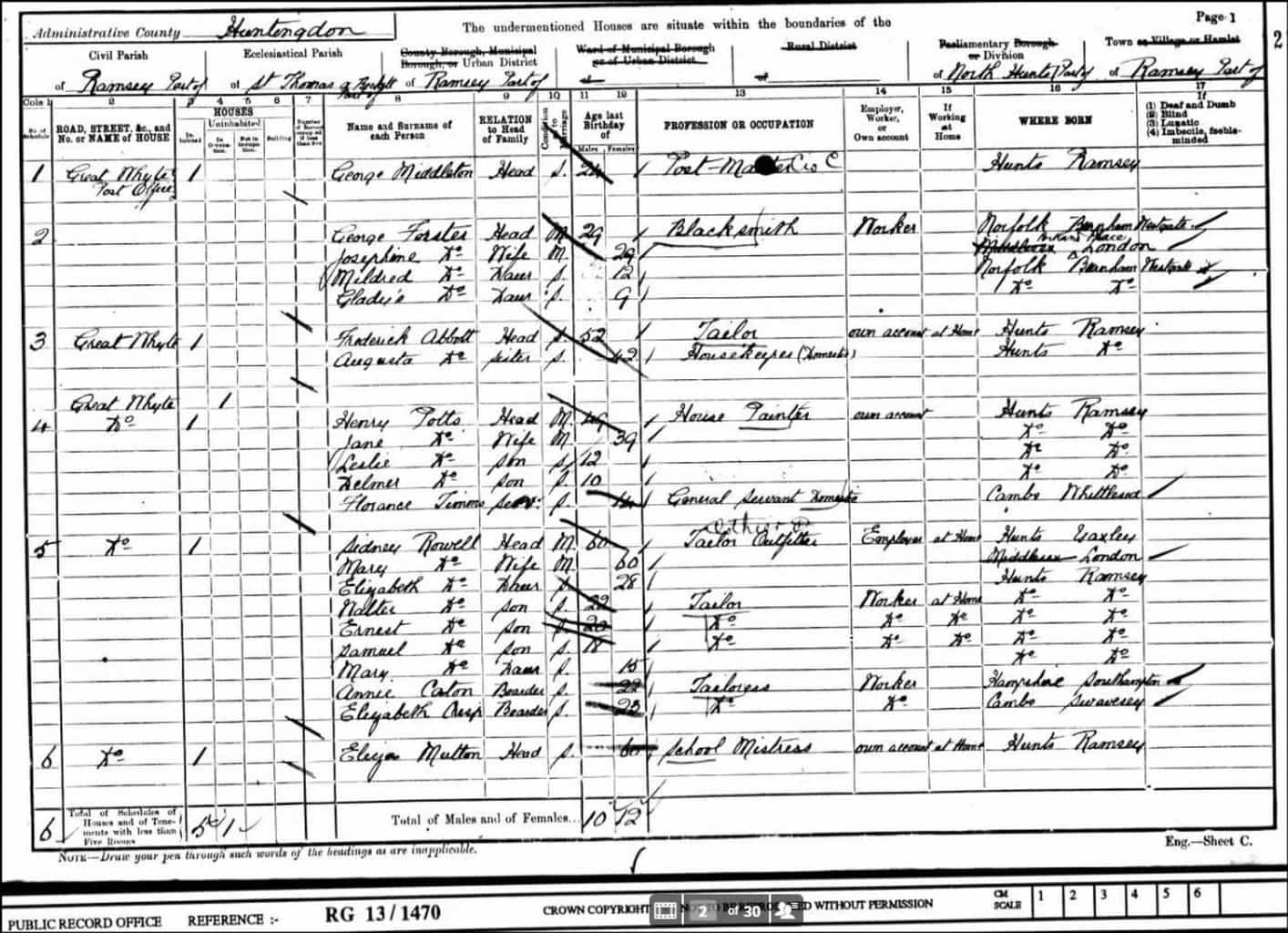 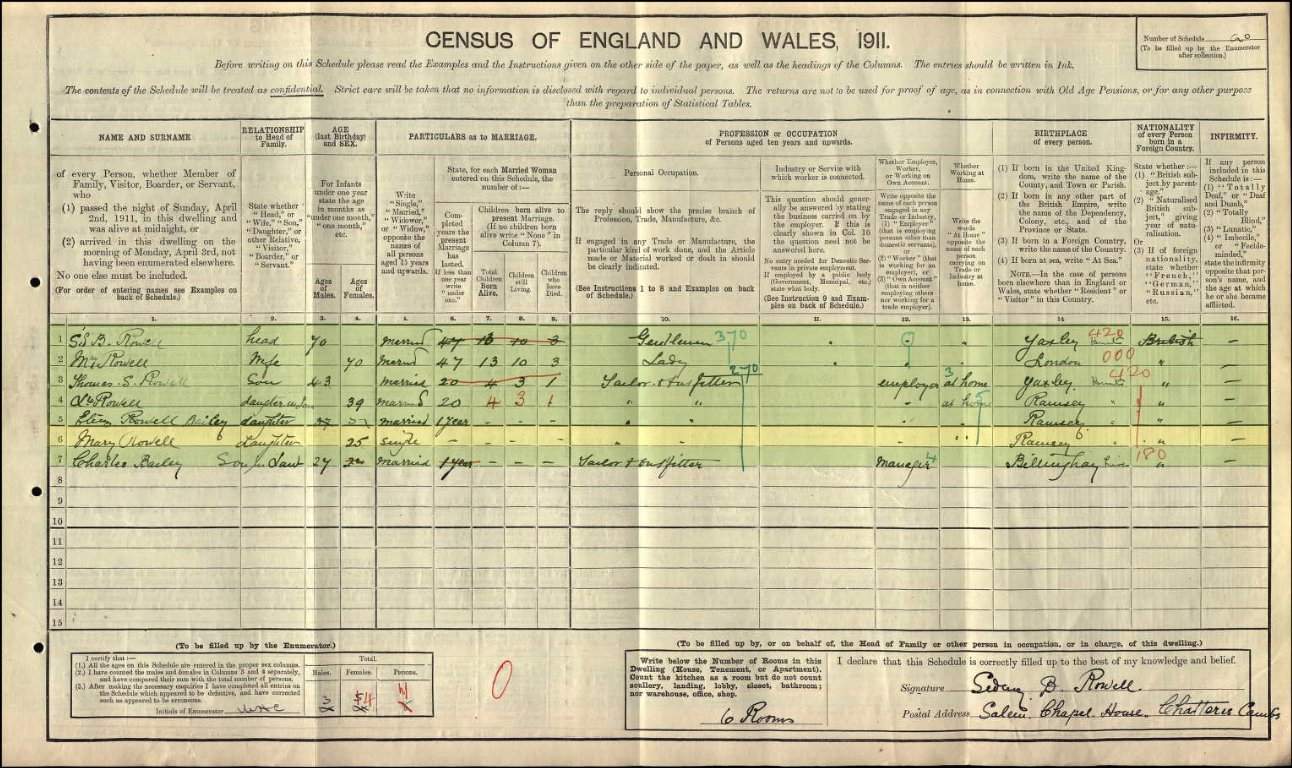 This picture shows a Tailors shop on Chatteris High St from around 1901: 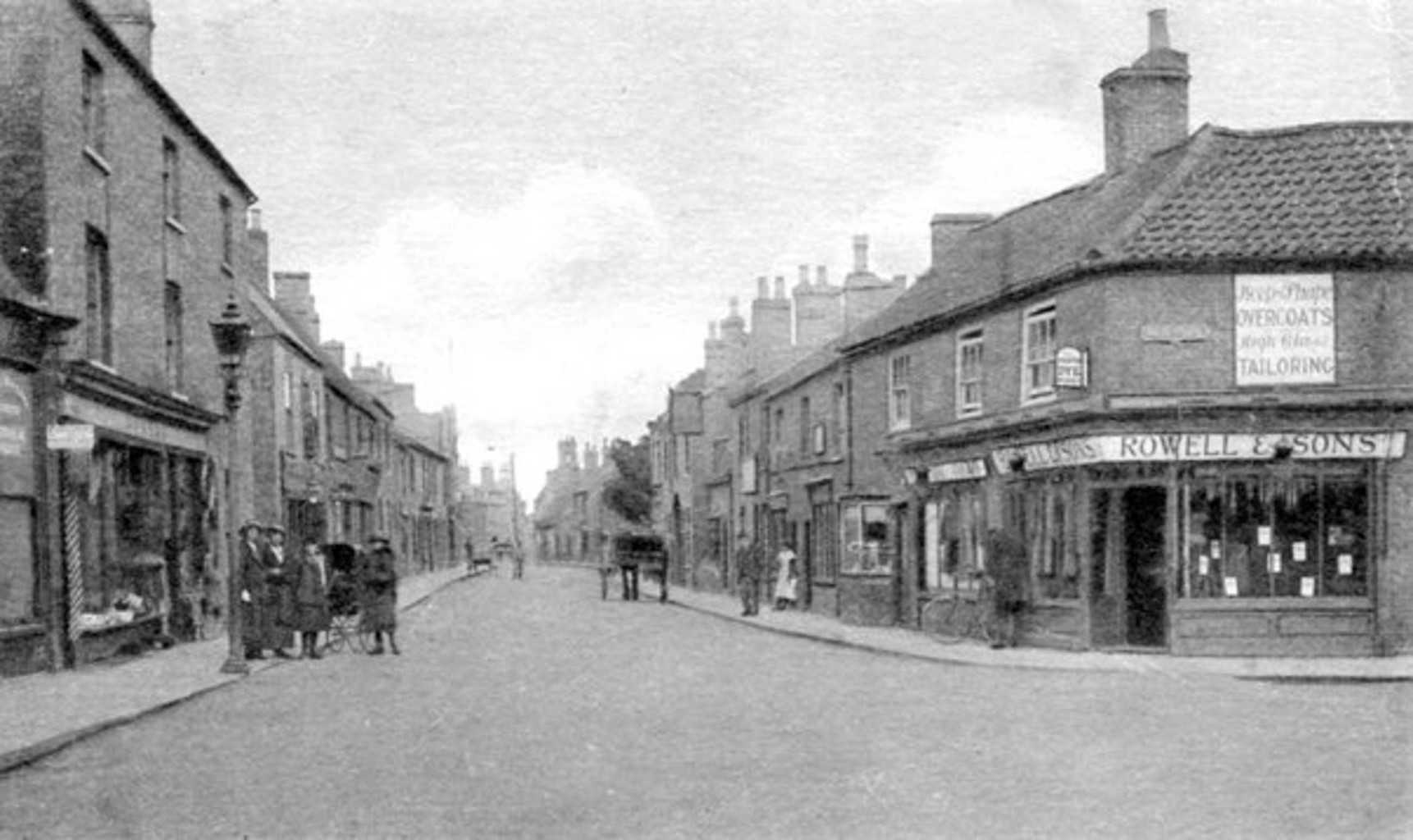 At the end of his life Sidney was appointed as the Pastor of Salem Baptist Church in Chatteris and moved to live in the Chapel House there.

The Census details describe the location of Chapel House as being on Hive Lane, Chatteris. This is now Huntingdon Road.

This the new Salem Chapel which replaced the old chapel shown above. 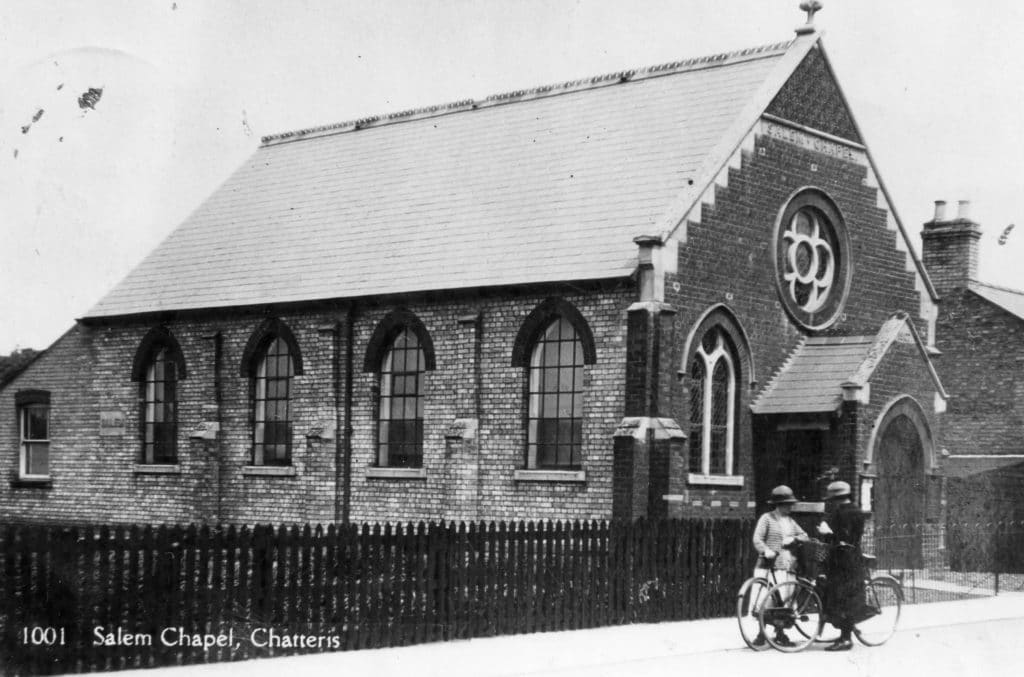 “The particular Baptist chapel in Hive Lane was endowed by Miss Claridge in 1800 with lands now producing £50 yearly for the support of a minister, and has sittings for 250”

In Loving Memory of

“Blessed are the dead which die in the Lord”

Beloved Wife of the above

“To be with Christ, which is far better”